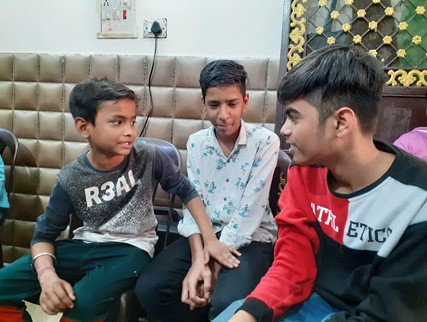 This a one of the conversations we had with 11-year-old Govind who takes pride in being an ‘AOC’ – Agent of change.

They say that even though women are the harbingers of change and they must be empowered to stand against all odds; to take on the tough fights but they don’t have to do it all on their own. Men can contribute to the dialogue by aiding women, by being more conscious of their roles as shareholders in the society and helping them thrive in an otherwise threatening environment.

In our society, every time we talk about safer public spaces, the onus of ‘protecting themselves’ and being smart about the ‘right time to step out in the public’, lies on women. Victim blaming is a very soft term for something that our society indulges in, every time there is a case of harassment. This response, very easily creates a binary between ‘us’ and ‘them’ – between the perpetrator and the one’s with a higher moral consciousness. Us and the likes of us who ‘will never do anything like this’. The kind of class and caste wedge it creates is anything but subtle. When we take on such a behaviour, we as a society also rid ourselves from the responsibility of contributing to raising our boys, better. In extreme cases, we aid the perpetrators – by validating their behaviour on the streets (when we turn a blind eye to catcalling) and on other occasions, by having a hearty laughter on sexist jokes inside our own drawing rooms.

We were stunned when we posed a question on similar lines to 11-year-old Govind, asking him, wouldn’t it just be much easier and better if he maintains his distance from boys who are street harassers? Wouldn’t a safe distance from them, help him save his own energy?
He looked at the interviewer in complete shock, as if she had asked an obviously absurd question and said, “But if I stop helping them improve, they will continue to get worse. I can’t stop being their friend until they become better people. That’s not being a good friend, now, is it?”

Us adults, we are so quick in dissociating and making a quick distance from people we don’t share ideas with. Of course, one needs to preserve their energy but one must also introspect about their echo chambers. Once in a while, we must all step up, channel our inner Govind and have the tough conversation.

MCKS Trust Fund is extremely proud to be associated with CEQUIN that decides to include young boys and men in the conversation and run a program called ‘Mardon Vaali Baat’. They help men redefine the idea of masculinity and what it means to be a ‘mard’ – a man.

CEQUIN believes that with the women’s movement continuing to fight against gender inequality, it is crucial to engage boys and young men to challenge the concepts of patriarchy and traditional masculinity, resulting in enhanced personal and social outcomes.

It is important to engage young boys because adolescence is a crucial phase in their own development. If we can create in them at this stage, an understanding of why gender equality has to be a norm and that they must advocate for and promote empowerment of girls and women, we have indeed taken that first crucial step towards creating a gender just society.

To know more about ‘Mardon vaali baat’ from our Agents of Change, visit our YouTube Channel.

A Warm Thank You